You can enable/disable right clicking from Theme Options and customize this message too.

THE INGREDIENT AS MEDIUM

First, cooking a Michelin star as a master chef. Then converting a hot air balloon into a restaurant, then painting with food. And now the world’s first Galerie Culinaire, with Art & Eat gatherings at the intersection of art and gastronomy.

Ideas that are within her need to be mined. In our Museum of Taste & Beauty, the leading role this time is for sensitive go-getter Angélique Schmeinck (1964). We present a selection of her recent photographic works, curated and commented by the chef and artist herself. She started photographing ten years ago, exhibiting since two years. Her work expresses a sensual love of food, a fascination with color and texture, a desire to show the beauty of ingredients.

What actually prompted you to step out of the kitchen 20 years ago?

‘A kind of artistic restlessness combined with impatience. I had all sorts of creative ideas that I couldn’t implement in the restaurant yet because the guests weren’t ready for them. I had just returned from my trip from France where I had worked at two and three-star establishments, at Michel Troisgros*** in Roanne and Michel Guérard*** in Eugenie les Bains. Once back in the Netherlands, as chef at de Kromme Dissel* in Heelsum, I cooked a fantastic menu, completely balanced, very elegant.  At the end of the dinner I found myself at the table of two guests who had eaten the entire menu. Fantastic, so innovative, spectacular, they told me, but so tiring…haha. I presented a bonbon of white chocolate, basil and beet made: now you could say “oh, how nice,” but twenty years ago…The guests couldn’t handle it yet.’

You couldn’t express everything in cooking?

‘Signals like that made me restless; it meant that I had to curb my desire to experiment. I was really heartbroken at times because I couldn’t express my artistic urges. In the restaurant I worked at least ten to twelve hours a day. Working so hard makes you exhausted: not in the sense of overtired, but creatively exhausted.

I noticed very strongly that I needed new stimuli to develop myself. I felt I was standing still. It took me about two years to make the decision, that’s how difficult I found it. And when I went to the Michelin Benelux inspector – Paul van Craenenbroeck – and I told him that I was leaving to develop myself further, he was shocked: “But madam, what are you doing now? I would have received a second star! I must say that I think back to that moment every now and then. If only I had been more patient. Then maybe I would have shaped my artistry in a different way in my own restaurant.’

How were you looking at the future at the time? Did you have a definite plan?

No, the future was completely open! I had to go through six months of rehab. And then I thought: my God what have I done? Then you realize what kind of world you came from: how the kitchen can numb you because you are so one-dimensional. I started writing a book: A Mouthful of Art. I also immersed myself in creative thinking techniques and the workings of the brain. I discovered the great importance of getting inspiration from myself. This made me feel more free and able to express myself more easily. But after a year of writing and deepening, all my money was gone. I then started giving inspiration sessions to chefs and for the hotel industry.’

How do you describe artistry? What does it mean to you?

‘It’s a feeling, it’s an urge for expression. I want to do something with the images of my imagination and with what I see around me. To find the complete freedom to express myself. Over the past twenty years, the urge to pay attention to my artistic heart has grown and only now am I most engaged in it.

Is other people’s opinion of your work less important now?

Then you have to throw off all shyness.

I think that’s the beauty of getting older. I’ll be 56, and now I think if I want to do something new: I’ll just do it. I can’t play the guitar very well, I can’t read a note and only play a few chords. But I can play and sing from my emotion. The first time, of course, I wondered what people would think of me: she cooks, she photographs, and now she plays the guitar… Just do it, I said: I can always say that I can cook better than play guitar, haha. During Art & Eat tastings I pick up the guitar when I feel it suits the evening and the dish. And then when you show your vulnerability, you get something beautiful in return. There are guests who have tears running down their cheeks.’

However deeply you touch people, it remains fleeting. A dish is not permanent.

The dish disappears, but the memory of the taste remains. If a dish is completely in balance – contrast, color, smell, shape, texture – that sets in the taste memory for seven out of ten people. I’m sure of that.’ 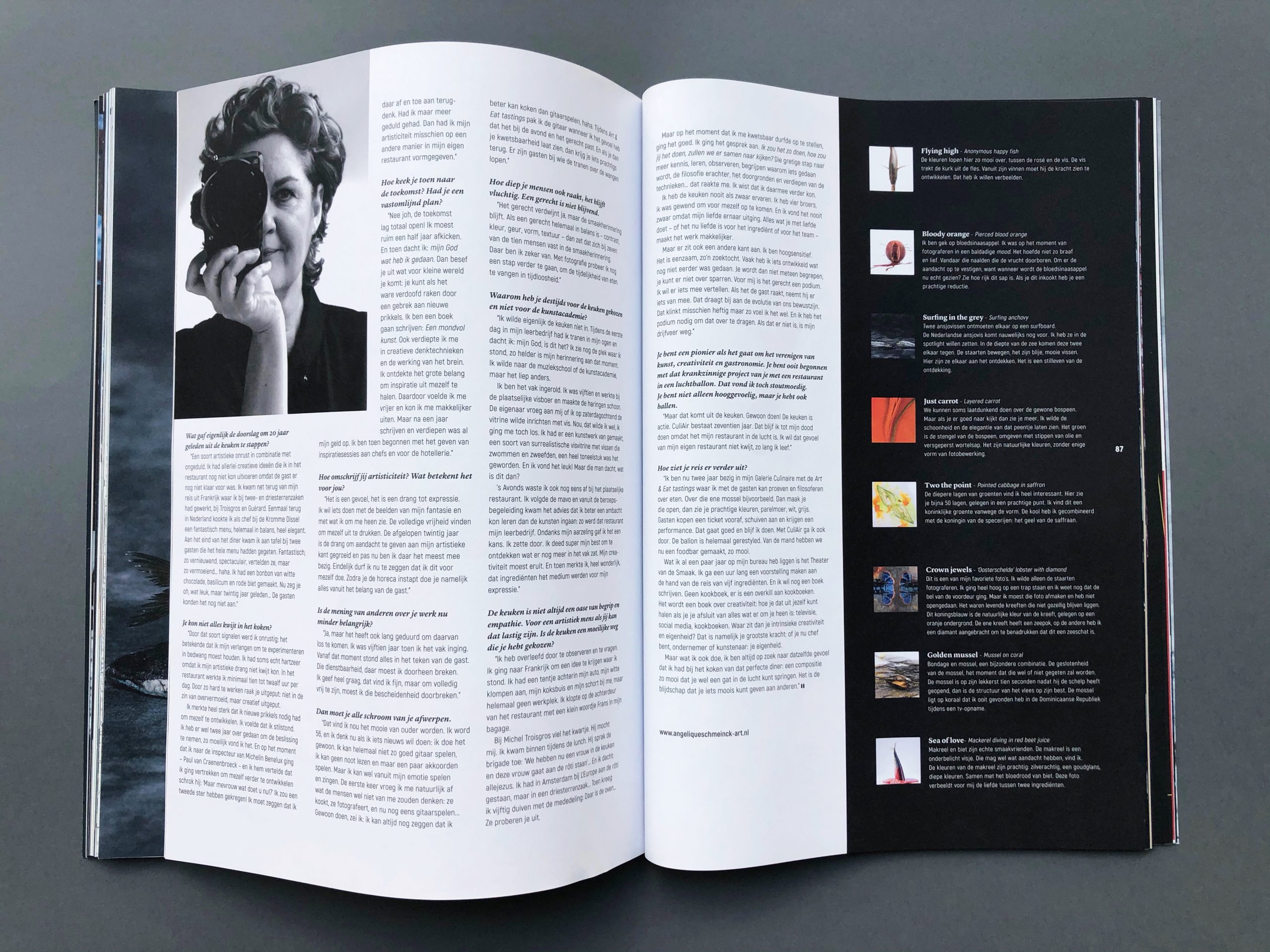 Why did you choose the kitchen at the time and not art school?

‘I didn’t actually want to go into the kitchen. During the first day in my apprenticeship, I had tears in my eyes and thought, my God, is this it? I can still see the spot where I was standing, that’s how clear my memory of that moment is. I wanted to go to music school or art school, but things turned out differently.

I entered the profession. I was fifteen and worked at the local fishmonger’s and cleaned the herrings. The owner asked me if I wanted to decorate the showcase with fish on Saturday mornings. Well, I wanted to, I went wild. I had turned it into a work of art, a kind of surrealistic fish showcase with fish that swam and floated, a whole play it had become. And I liked it!

In the evening I did the dishes at the local restaurant. I went to secondary school and the vocational guidance counsellor advised me that it would be better for me to learn a trade than to enter the arts: that is how the restaurant became my training company. I gave it a chance and persevered.  I wanted to discover what else was in the business. My creativity had to come out. And then I noticed, quite miraculously, that ingredients became the medium for my expression.’

The kitchen is not always a haven of understanding and empathy. For an artistic person like you, that can be difficult. Is the kitchen a difficult path you’ve chosen?

‘I survived by observing and asking. I went to France to get an idea of where I stood. I had a tent in the back of my car, my chef’s jacket and apron with me, but no work area at all. I knocked on the back door of the restaurant with a small word of French in my luggage.

At Troisgros, the penny dropped. He liked me. I came in at lunch time. He addressed the brigade: ‘We now have a woman in the kitchen and this woman is going to be at the rôti’…. And I thought all joking aside. I had stood at the rôti in Amsterdam at L’Europe, but in a three-star restaurant…. Then I got fifty pigeons saying: there’s the oven…. They’re trying you out.

But the moment I dared to make myself vulnerable, things went well. I entered into the conversation. I would do it like this, how would you do it, shall we look at it together? That eager step towards more knowledge, learning, observing, understanding why something is done, the philosophy behind it, penetrating and deepening the techniques…that touched me. I knew I could go on with that.’

I never experienced the kitchen as tough. I have four brothers, I was used to standing up for myself. And I never found it tough because my love went to it. Anything you do with love – whether it’s love for the ingredient or for the team – makes the job easier.

But there’s also another side to it. I’m highly sensitive. It’s lonely, such a search. Often I did something that had not been done before. You’re not immediately understood, you can’t spar about it. For me the court is a stage. I want to say something with it. If it touches the guest, he takes something away from it. That contributes to the evolution of our consciousness. That may sound intense but that’s how I feel about it.

You are a pioneer when it comes to uniting art, creativity and gastronomy. You once started that crazy project of yours with a restaurant in a hot air balloon. I thought that was bold, after all. Not only are you highly sensitive, but you have balls.

‘But that comes from the kitchen. Just do it! The kitchen is action. CuliAir has been around for seventeen years. I’m going to keep doing that until I die because it’s my restaurant in the sky. I don’t want to lose that feeling of my own restaurant as long as I live.’

‘I’ve been working at my Galerie Culinaire for two years now with the Art & Eat tastings where I can taste and philosophize with guests about food. About that one mussel, for example. Then you open it up, then you see beautiful colors, mother of pearl, white, gray. Guests buy a ticket in advance, sit down and receive a performance. That goes well and I will continue to do it. I will also continue with CuliAir. The balloon has been completely restyled. We’ve turned the basket into a sky bar, so beautiful.

What I’ve had on my desk for a few years now is the Theater of Taste. I’m going to do an hour-long performance based on the journey of five ingredients. And I want to write another book. Not a cookbook, there is an overkill of cookbooks. It’s going to be a book about creativity: how you can get that out of yourself if you cut yourself off from everything around you: television, social media, cookbooks. So where is your intrinsic creativity and individuality? Because that is your greatest strength: whether you are a chef, an entrepreneur or an artist: your individuality.

But whatever I do, I’m always looking for that same feeling that I had when cooking that perfect dinner: a composition so beautiful that you can jump out of the air. It’s the joy of being able to give something beautiful to others.’