You can enable/disable right clicking from Theme Options and customize this message too.

Art to eat
Many chefs ‘paint’ with flavors on the plate. Angélique Schmeinck goes much further. In her culinary gallery in Velp, she not only creates edible paintings but also makes food photos come to life during ‘Art & Eat’ nights. “What is my role? Seasoning emotions: I flavor the senses with gourmet, edible art.”

At first glance, it seems like you’re walking into an ordinary art gallery. But as you walk further into the space, you discover art everywhere that is surprisingly different. There are no paintings here, but intriguing photographs of ingredients.

Like the one of a black and blue Oosterschelde lobster. If you come closer, you see barnacles that have hitchhiked on the lobster. Or your eye falls on a diamond. You wonder: what is this one doing there? “I want people to look consciously and check with themselves: what does this image do to me?”, explains Angélique Schmeinck about this picture called ‘Crown Jewels’. She is the owner of the Culinary Gallery in Velp where photos from her first exhibition are currently hanging called: “Sea Treasures“.

What’s special is that all the food photos were taken by Schmeinck. She is a cook but at a young age she wanted to go to art school. Photography has been her second passion for many years and she is now showing it off.

Culisophy
The gallery brings together everything the female chef has built up since she followed her heart in 2001. After a glittering career as a (star) chef, she traded her restaurant kitchen for the propagation of what she calls her ‘culisophy’. She brings out her wisdom and knowledge from the kitchen through presentations. For example, she makes live edible paintings with vegetables, seafood or meat. She does this on location but also in her studio.

Back to the exhibition “Sea Treasures“. There we see a beautiful picture of cockles, called ‘Sand Witches’. “Cockles are a culinary heritage in the Netherlands. We hardly eat it anymore.” Just like the Dutch shrimp depicted in the photo ‘Tripping Shrimp’. You see a shrimp ‘sniffing’ orange powder: a nod to ‘getting high’: “I like to add humor.” 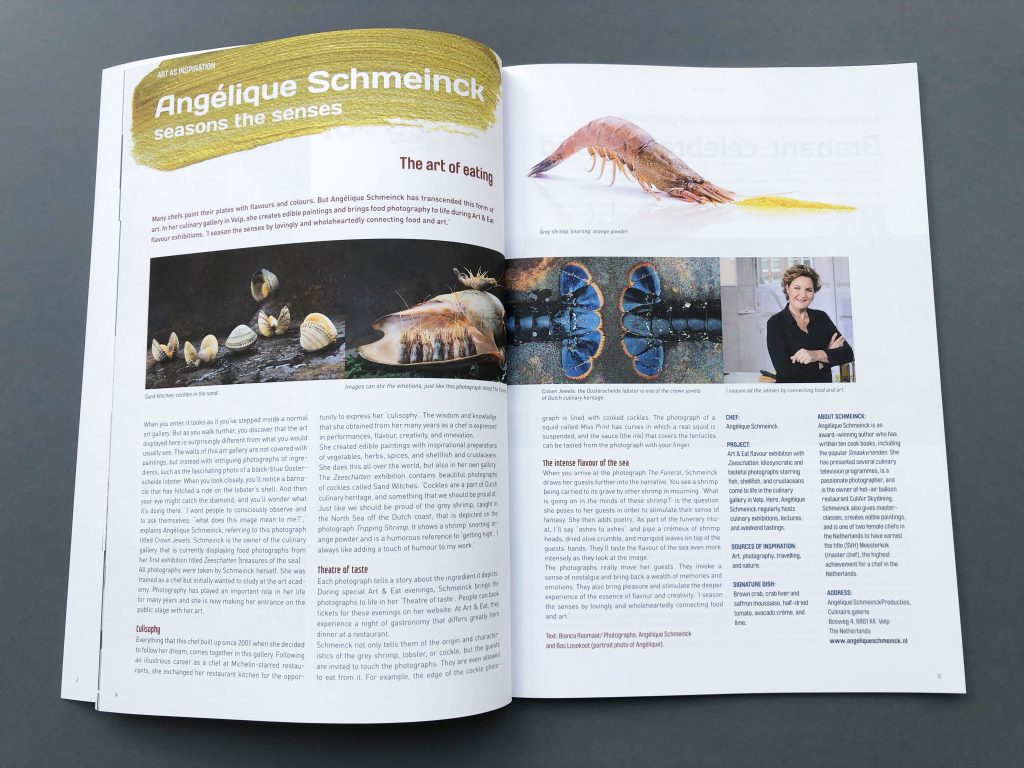 Theater of flavor
Each photo tells a story about the ingredient. During special ‘Art & Eat’ ‘evenings, Schmeinck makes the food photos come to life in her ‘Theater of Taste’. People can book tickets for this via her website. They experience a gastronomic evening that is totally different from that in a restaurant.

Schmeinck not only tells about the origin and characteristics of such a Dutch shrimp, lobster or cockle but also allows visitors to touch the photos. Or even eat them: on the edge of the cockle photo, there are (prepared) cockles. In an image with a squid called “Miss Print”, there are curves. In it hangs a real squid and the sauce (the ink) that is on the tentacles may be tasted (with the finger).

Intense taste of the sea
Arriving at ‘The funeral’, Schmeinck takes people further into the story. You see a shrimp being carried to its grave by other, grieving shrimp. “What would go on in the heads of those shrimps?” is her question to the audience to stimulate their imagination. In addition, she adds poetry. “As a burial ritual, I say, ‘Ashes to ashes’ and squirt a crémeuse of shrimp heads, dried olive spice and marigold petals on top of the guests’ hand. They thus taste even more the intense flavor of the sea while looking at the image.”
The pictures touch the visitors. After all, this is a funeral ceremony, and it evokes memories and emotions. “That’s exactly what I do: seasoning emotions: I flavor all the senses with my edible art photos.”